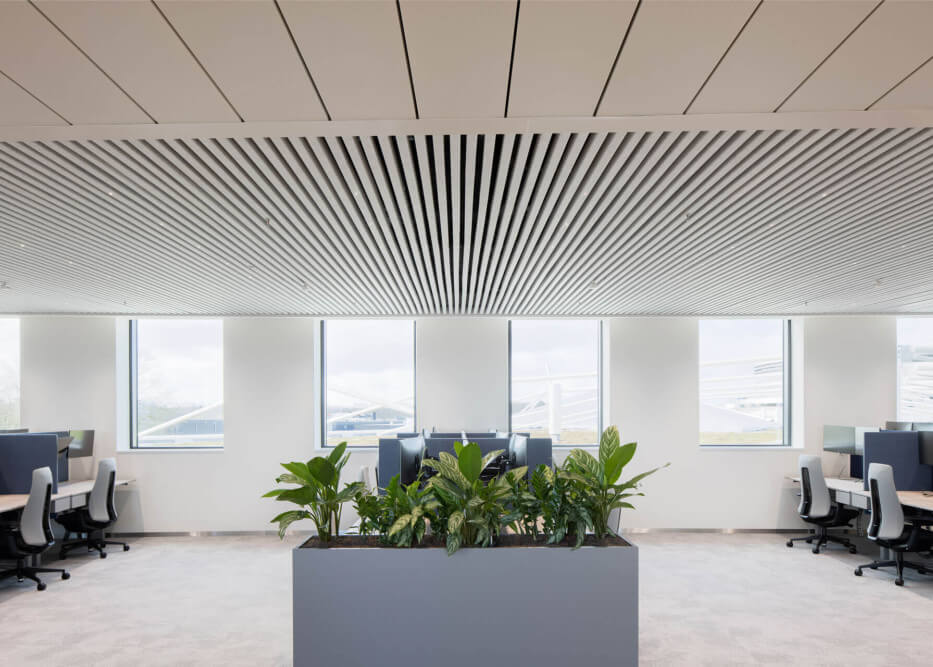 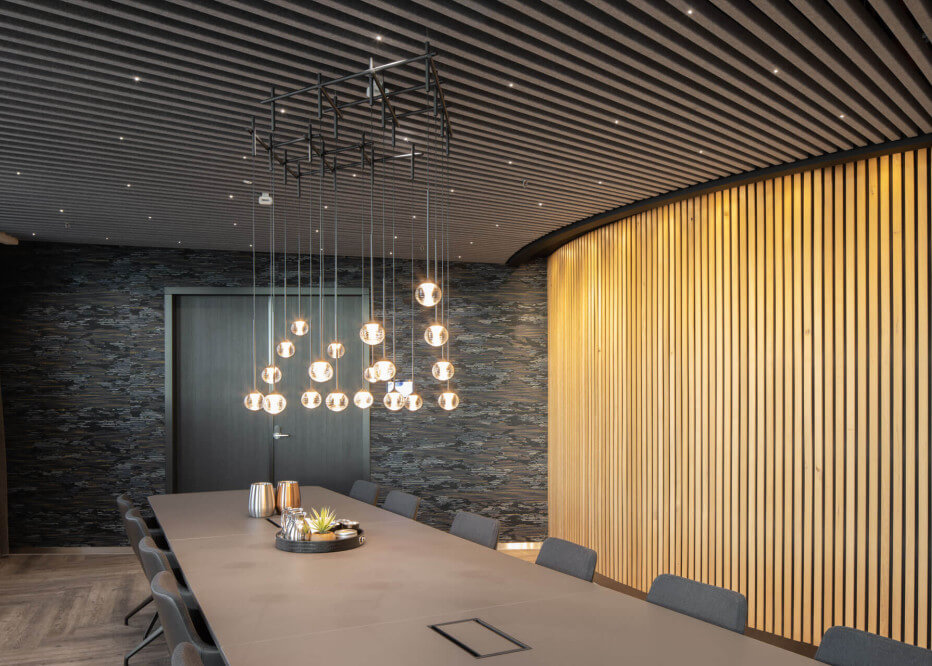 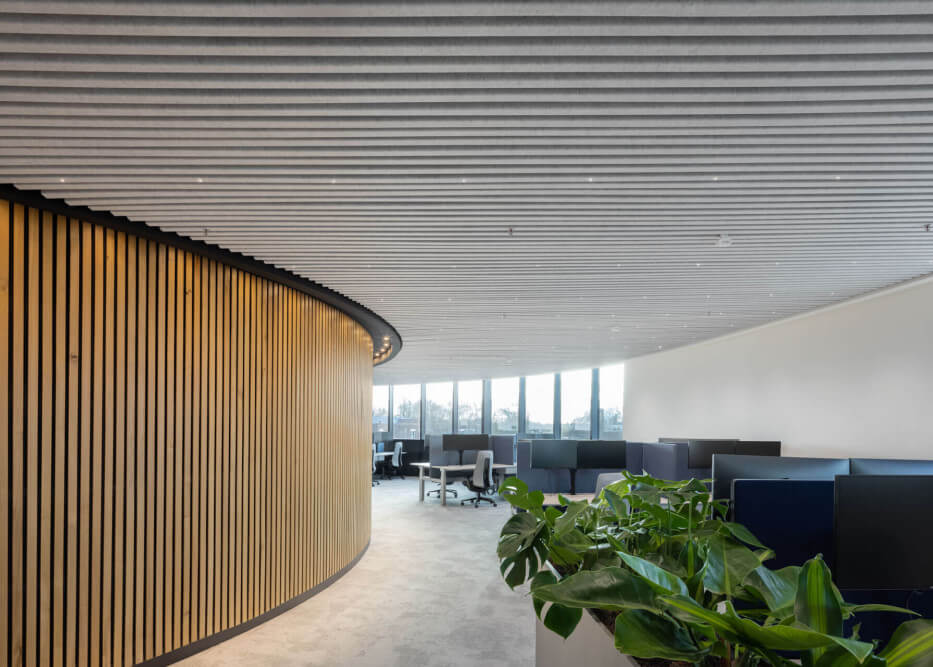 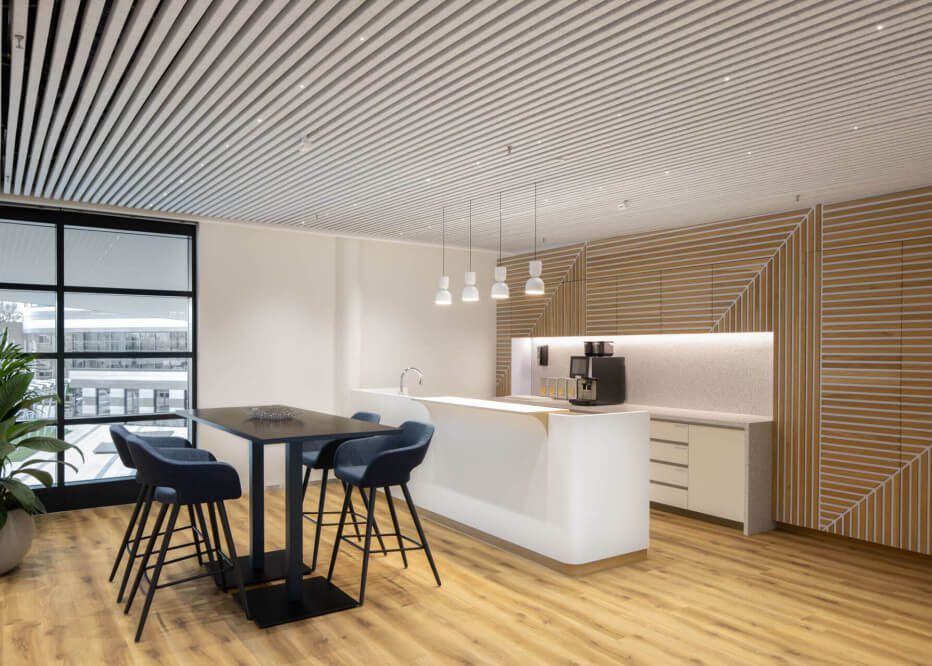 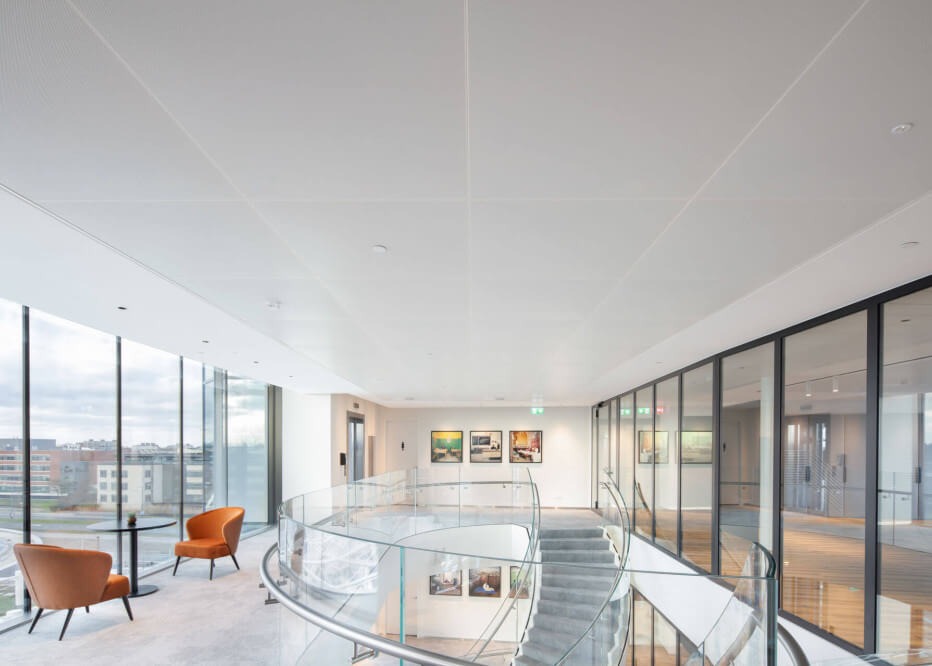 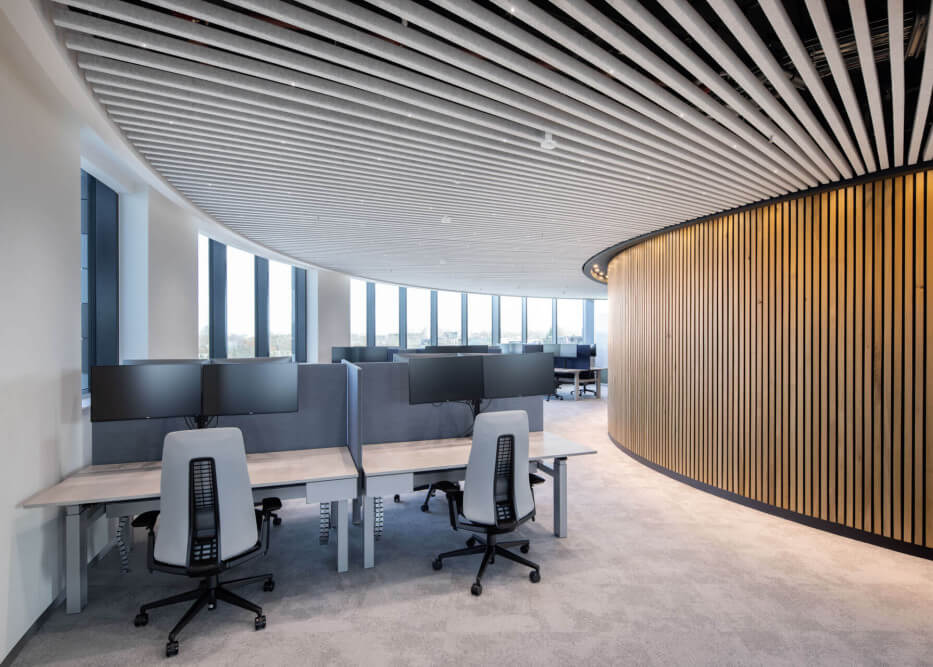 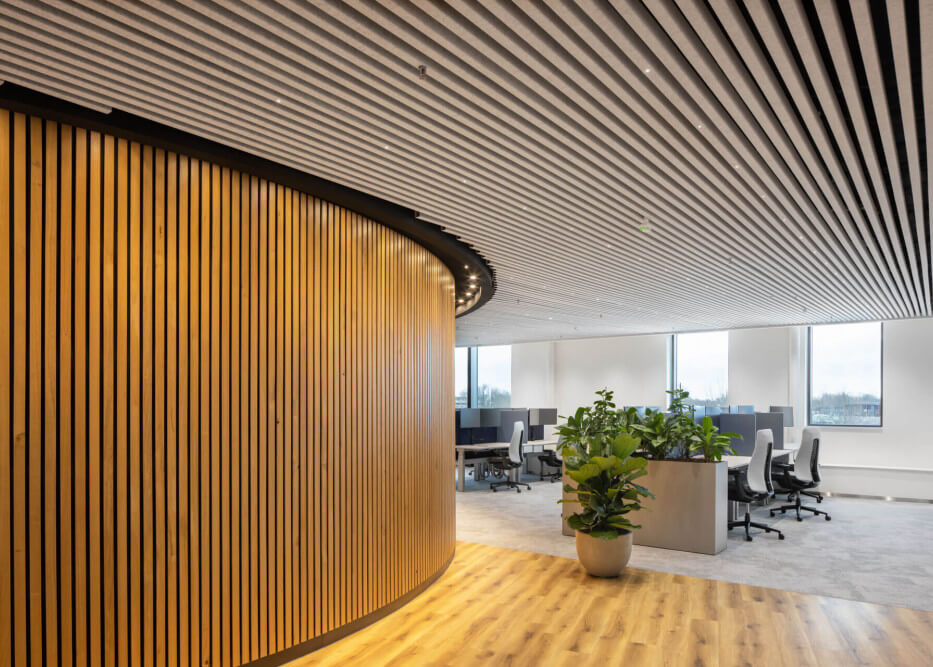 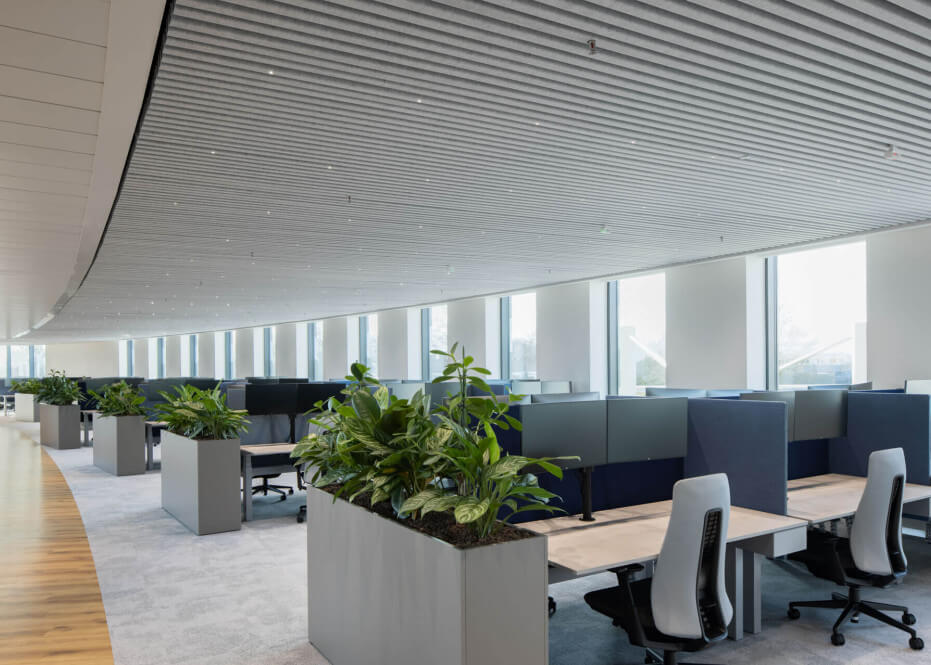 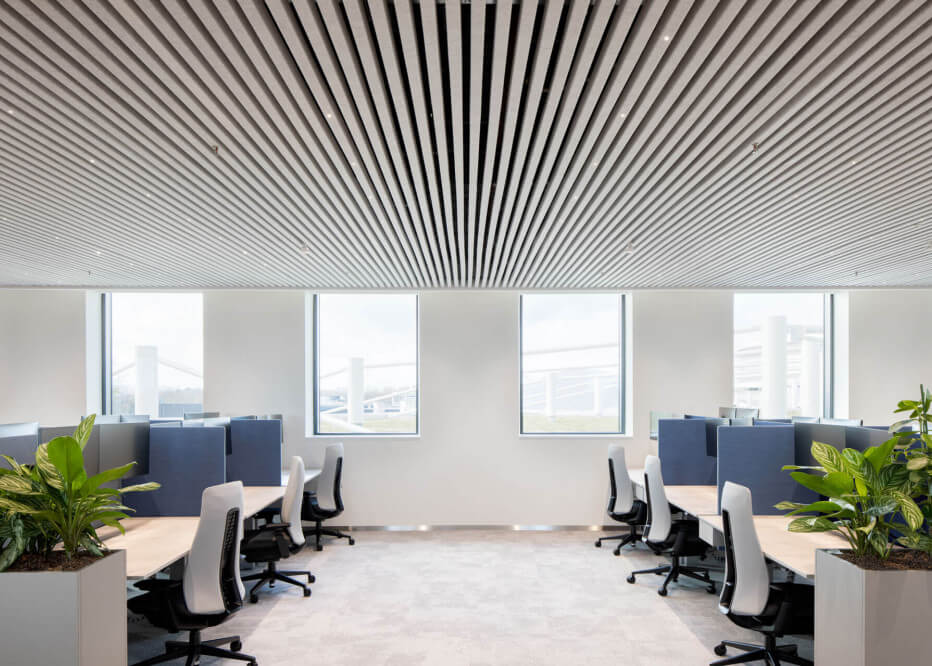 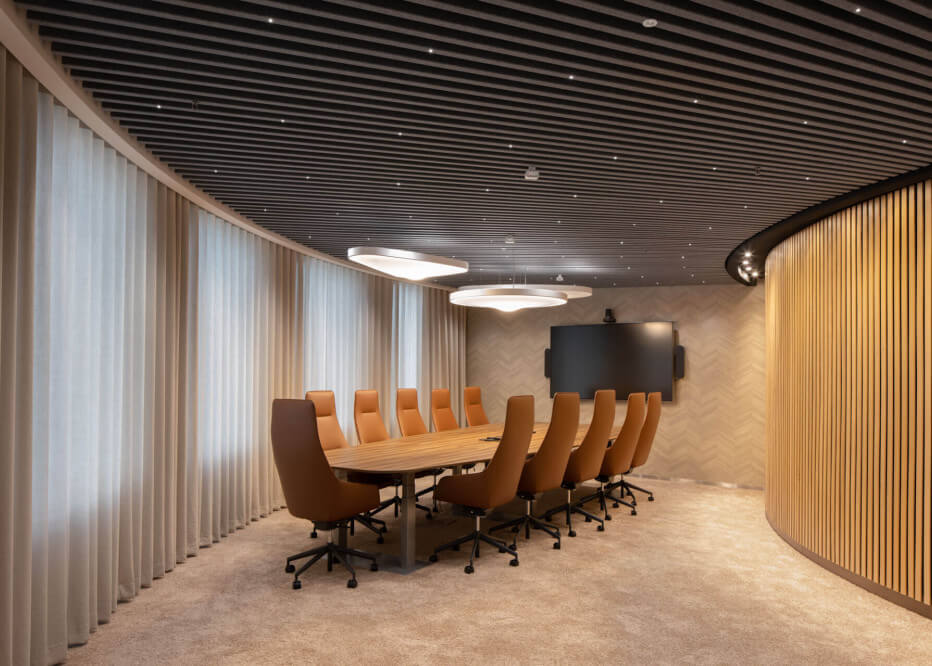 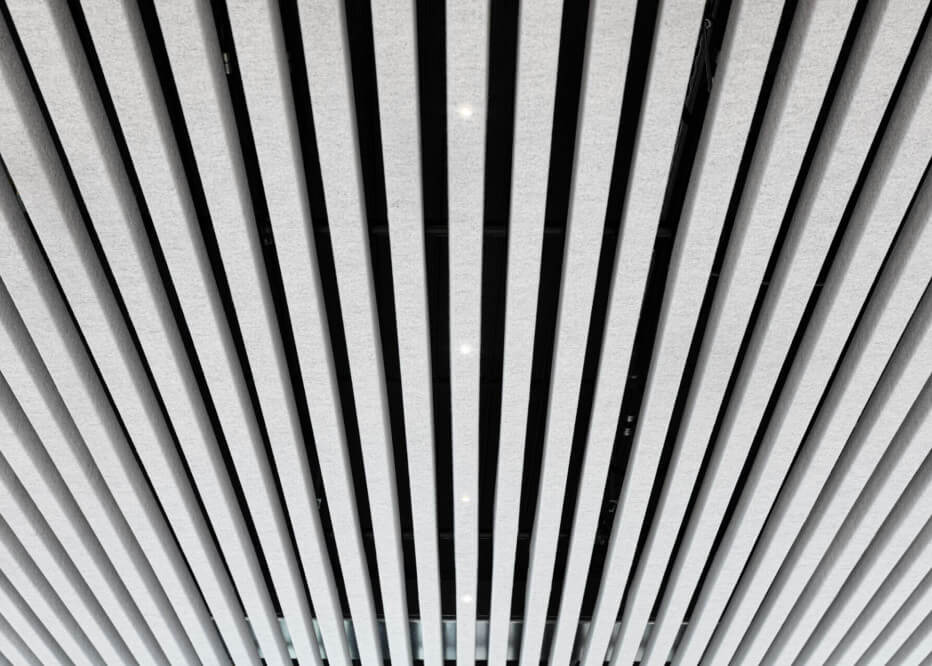 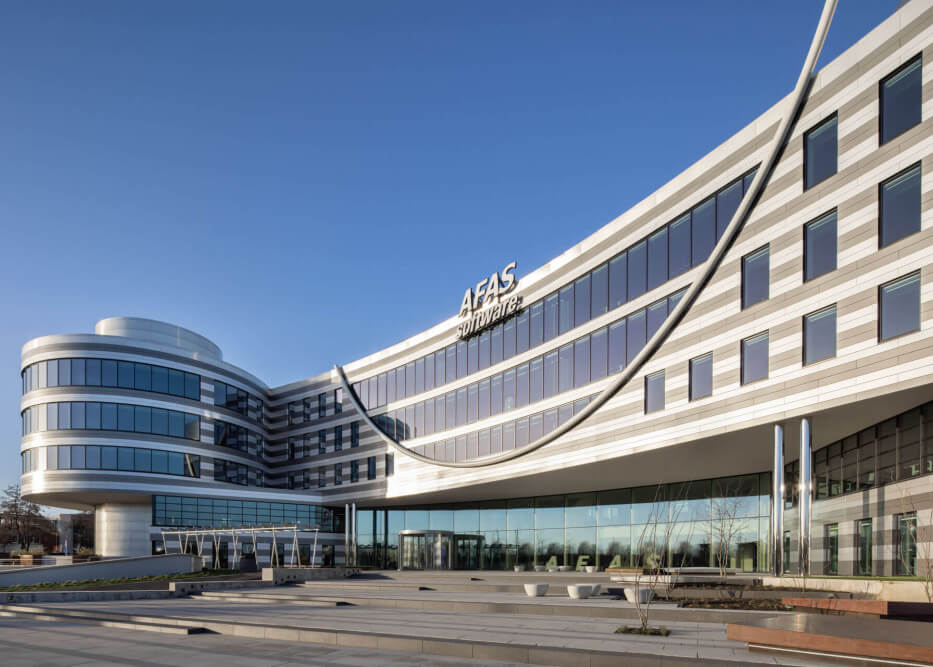 Software company AFAS has developed an impressive building in Leusden that focuses on the employee and customer experience; the AFAS Experience Center. The new construction comprises an ensemble of linked buildings (total: 62,000 m²), including a head office with two office towers, an atrium for events and exhibitions, a restaurant, a theater, a training center and various demo rooms on a plot of 4.5 hectares. Special about this project are not only the high sustainability ambitions, but also the round building shapes. This placed specific requirements on the installation techniques, including the climate ceilings.

Inteco was already approached in 2015 by installation consultant Valstar Simonis to help think about the most suitable climate ceilings for the office, demo and meeting rooms. “Ultimately, the choice fell on the PareauLux® linear climate ceilings , which we developed together with Hunter Douglas,” says tender manager Toine Vermeulen. “In our factory in Boxtel, a mock-up was made with aluminum panels in a curved shape, including the unique MeandRo climate system. The advantage of this activation is that the highest capacity is delivered along the curved facade, where the panels are furthest apart. After the tendering procedure, we worked out all the techniques further on behalf of HOMIJ Technical Installations . ”

The engineering intensity per square meter in particular was special, he emphasizes. “The 3D model submitted with the application showed that the linear ceilings would not only have a curved shape, but also had to slope towards the facade. Except for the office towers, the radii and mutual distances are nowhere equal. In addition, the air vents had to be hidden from view. This placed new demands on the air supply system, which we custom designed for this project and in close collaboration with HOMIJ. ” A climate chamber test followed, in which AFAS director Ton van der Veldt was also present. “At Inteco's head office, we noticed an activated stucco ceiling with felt panels,” he says. “The special aesthetics and C2C properties of these panels immediately appealed to us. Even better acoustics can be realized with felt. In addition, the material has a more homely appearance. We asked Inteco to make an offer for this as well, including integrated lighting. Ultimately, our choice fell on felt panels with tiny LEDs that mimic the effect of a starry sky. The visual result is beautiful. It is also nice that different colors of felt have been used in the various rooms. ”

In the AFAS Experience Center, three types of Inteco climate ceilings were ultimately used, with the unique MeandRo climate element providing the desired cooling or heating power. “In total we supplied approx. 6,000 m² PareauLux-HeartFelt® climate ceilings with felt panels, of which approx. 4,000 m² in the most complicated form. The Hunter Douglas team has designed and supplied special suspension clips for this ”, says Vermeulen. We have also supplied approx. 800 m² of metal MeandRo® climate ceilings, especially for the circulation areas. In the rooms where higher cooling capacities are required, the expanded metal MeandRo-V® climate ceiling has been installed (approx. 225 m²). ”

The special aesthetics and C2C properties of these panels immediately appealed to us. In addition, felt can achieve even better acoustics.

When doing so, sustainability serves as a benchmark

Inteco's ceiling solutions go hand-in-hand with the life cycle of the building. This is not only environment-friendly, but also offers the most financial benefits to clients. We also take into account what will happen to ceilings after their life span.