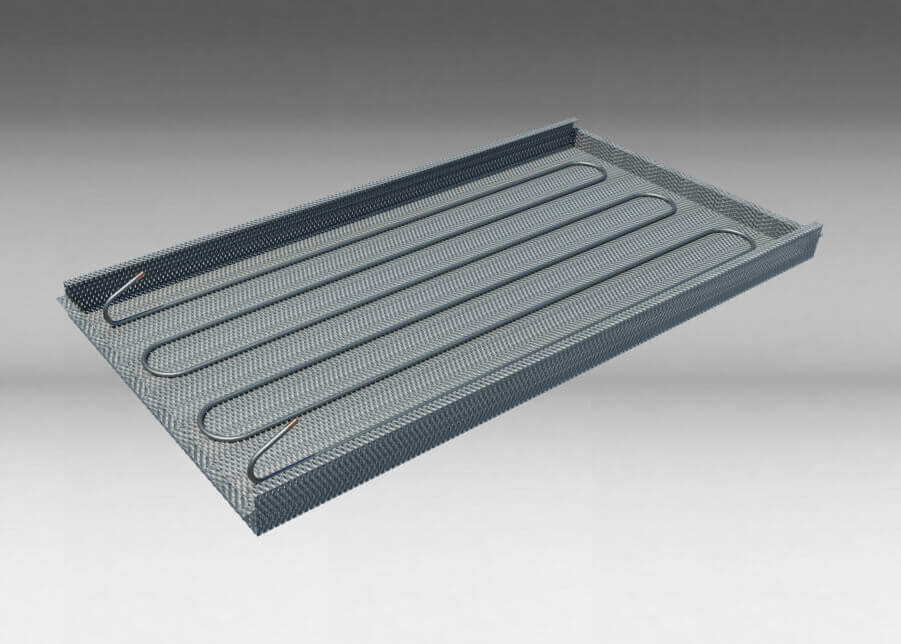 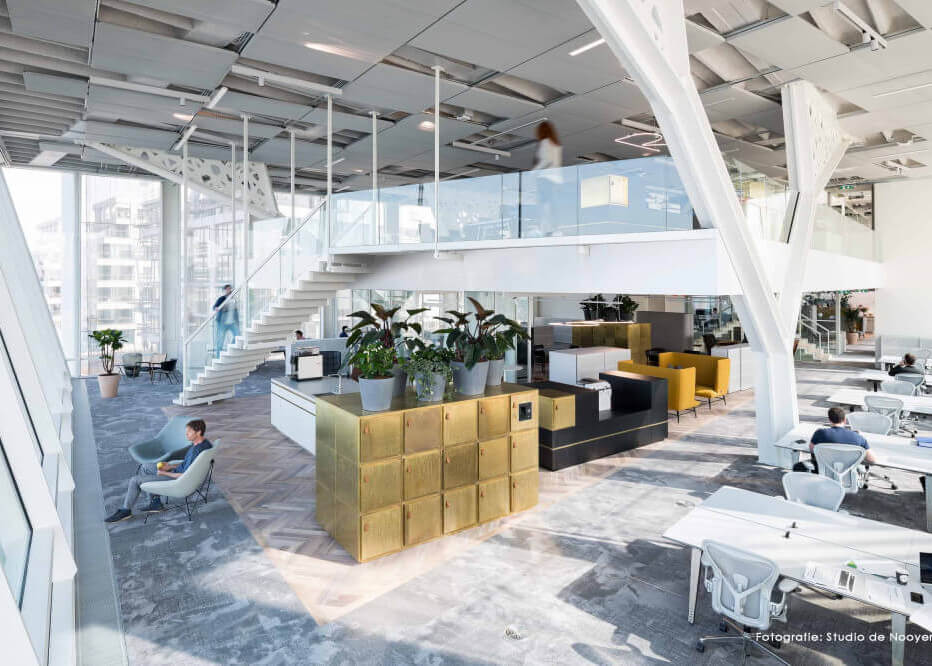 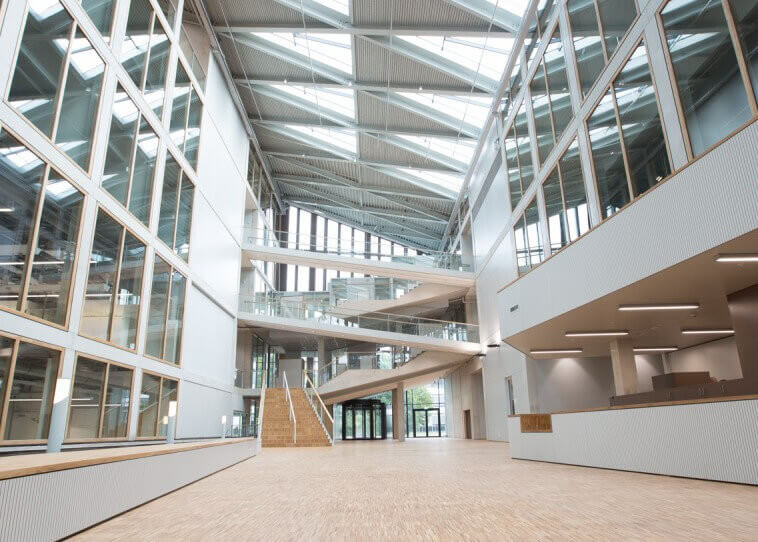 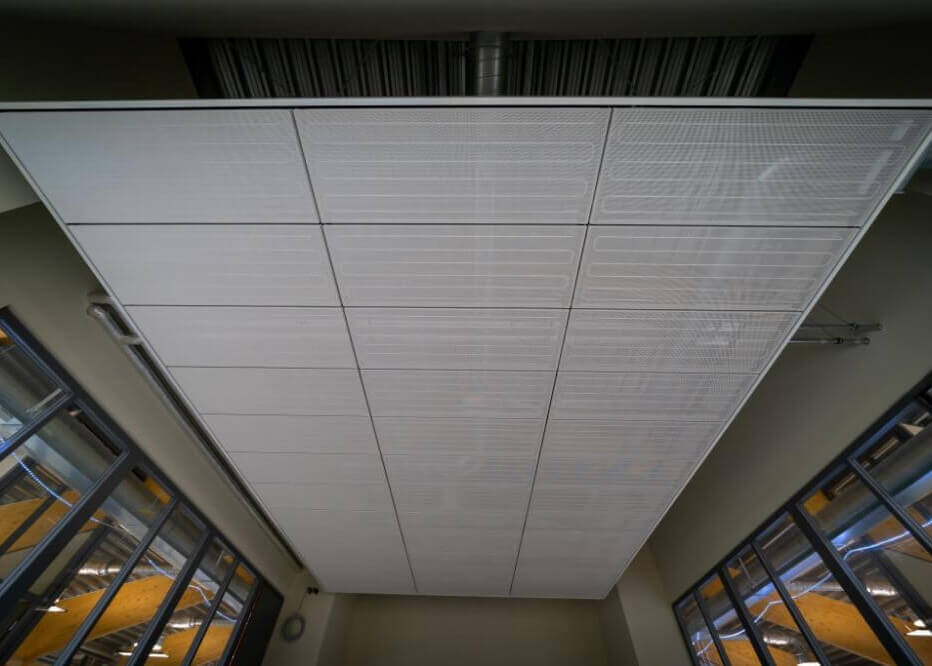 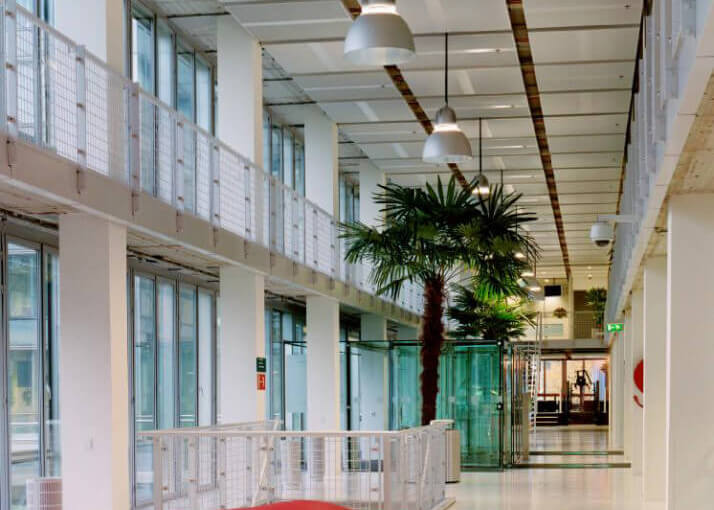 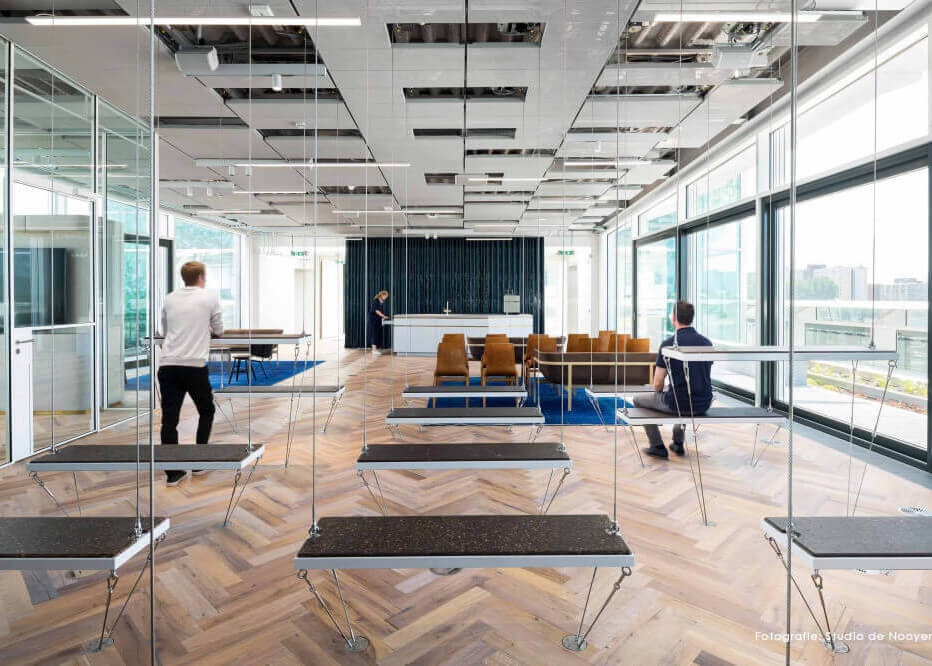 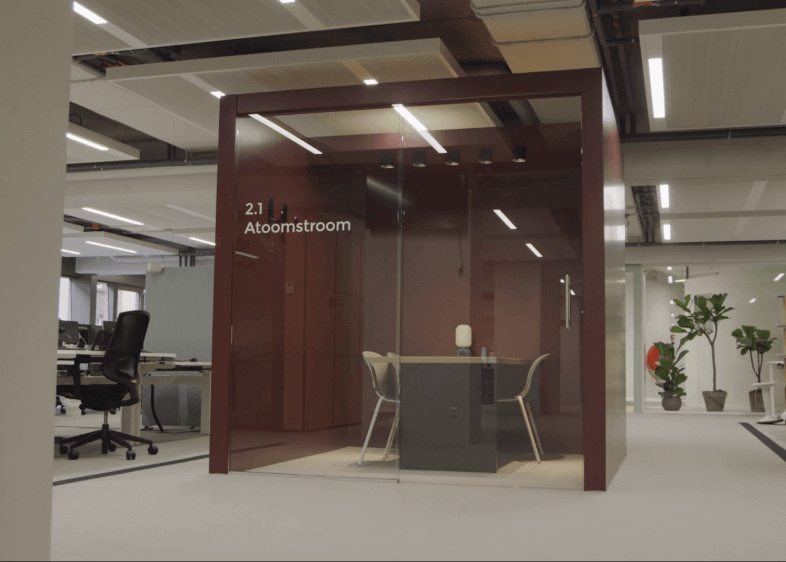 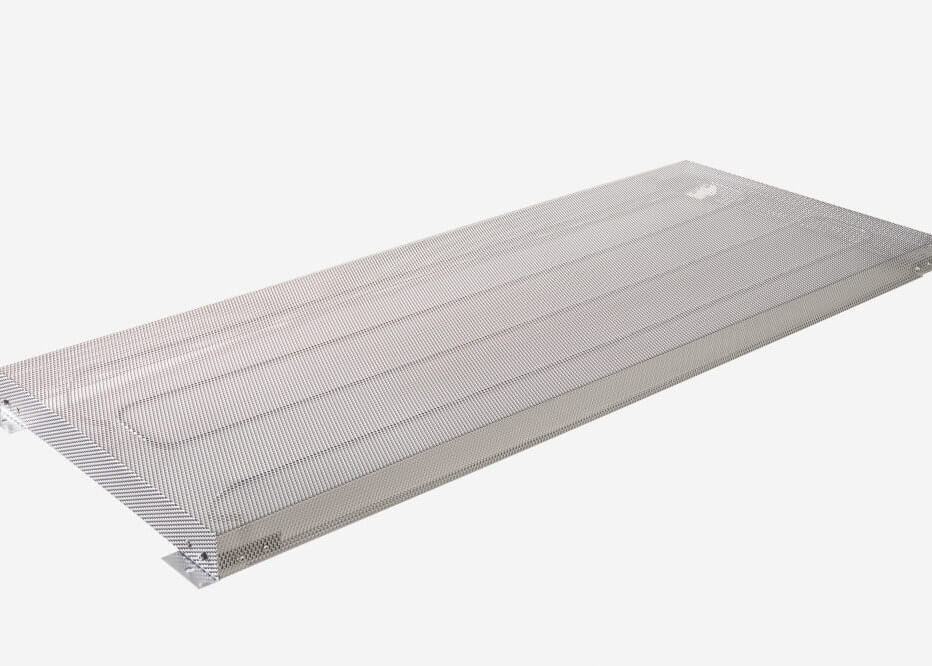 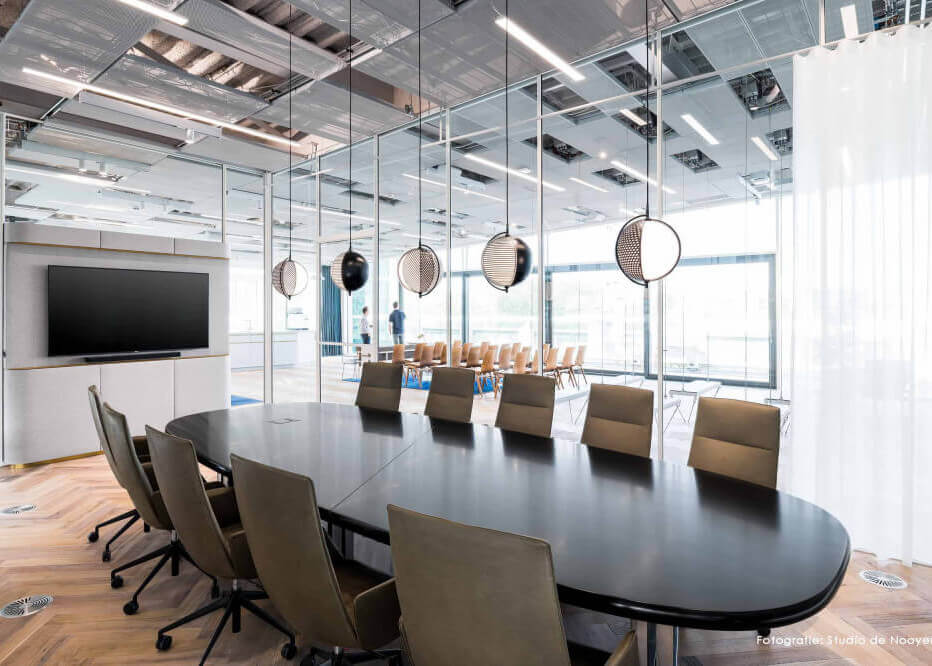 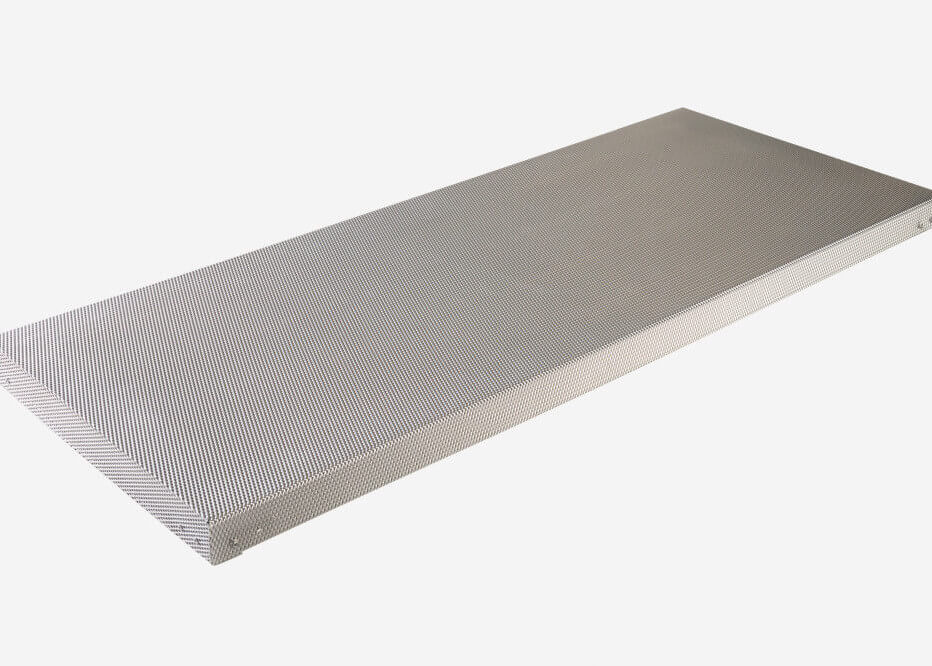 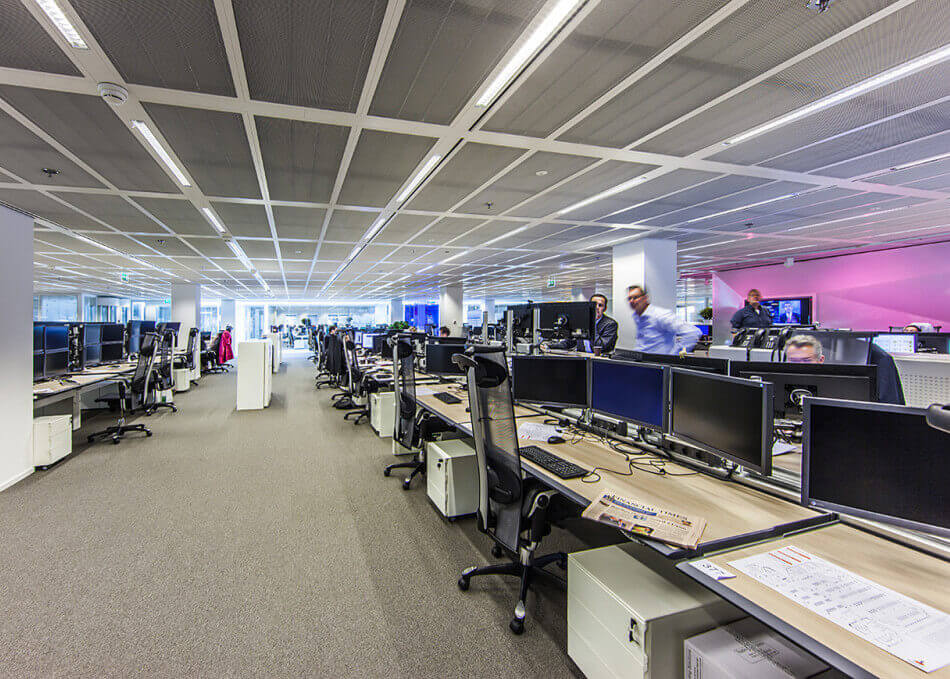 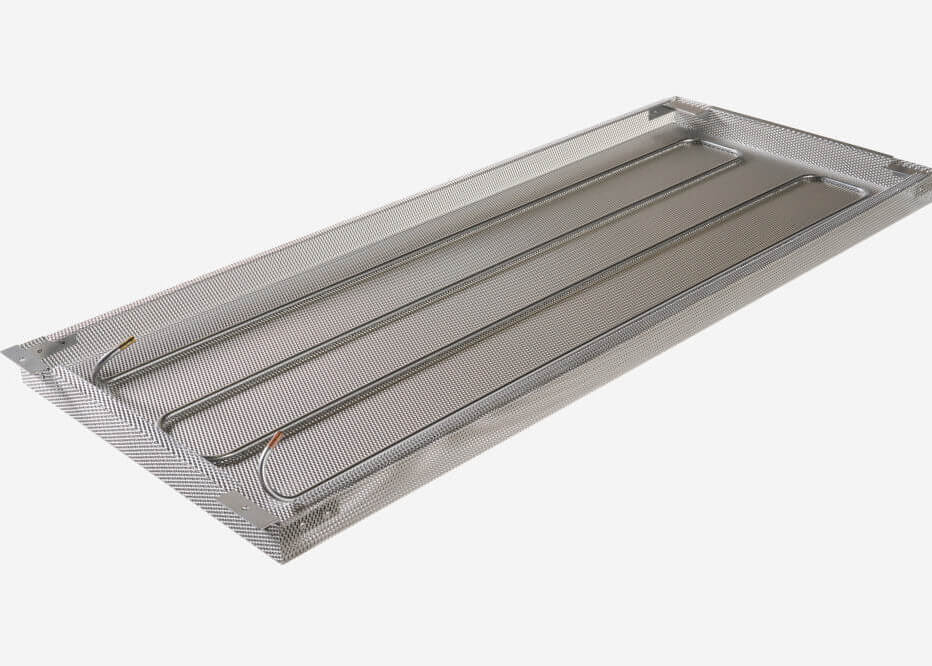 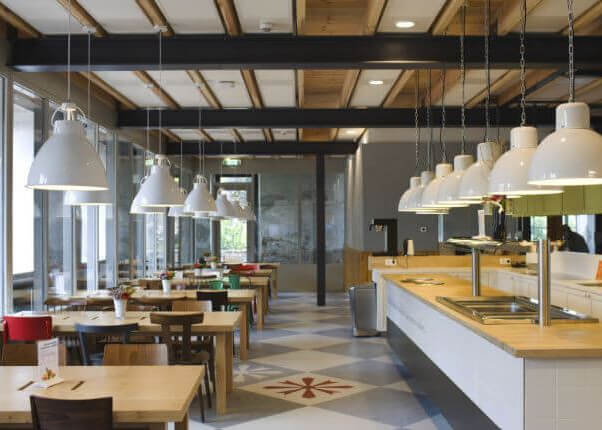 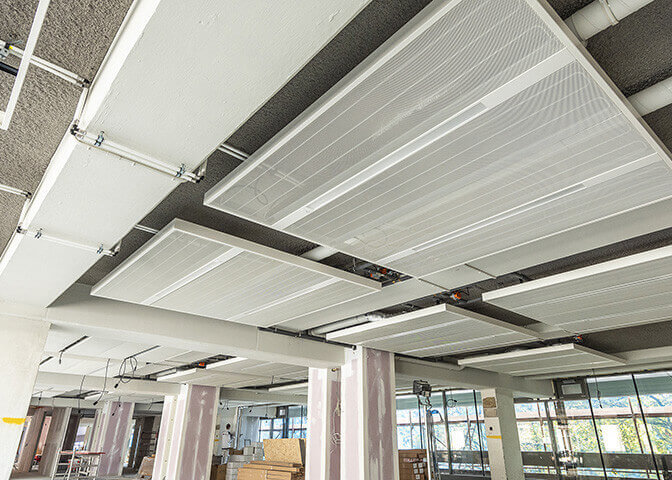 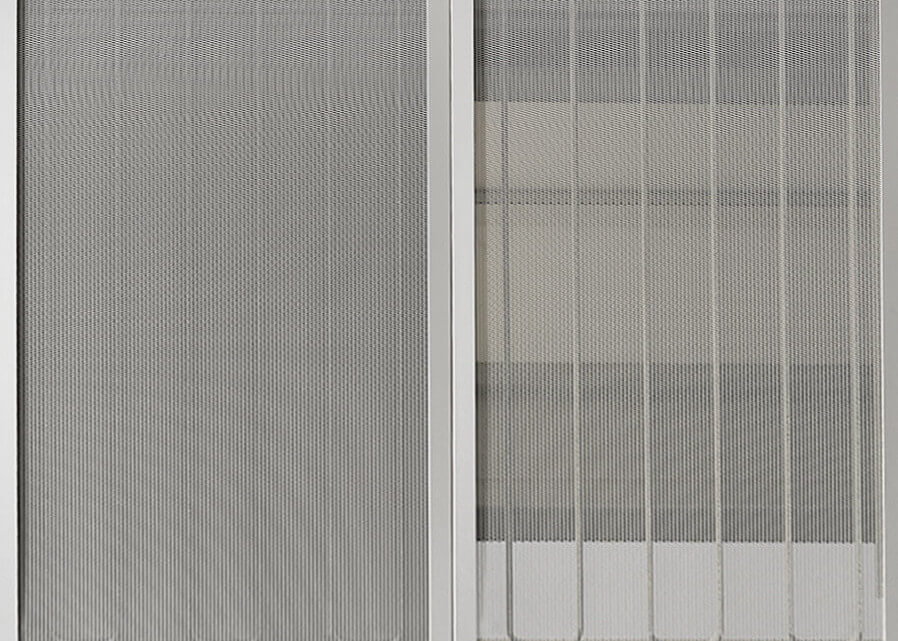 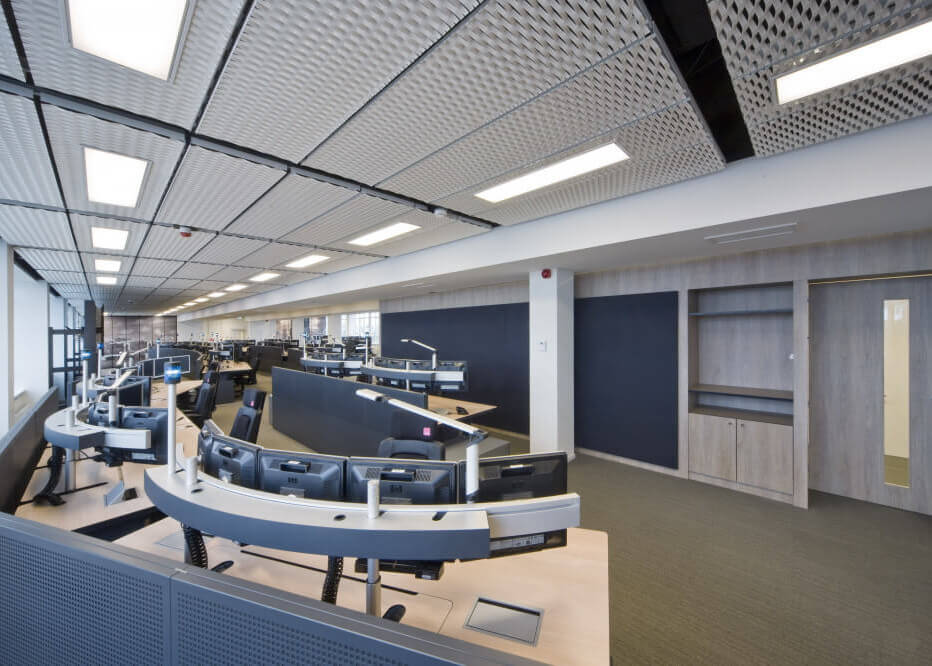 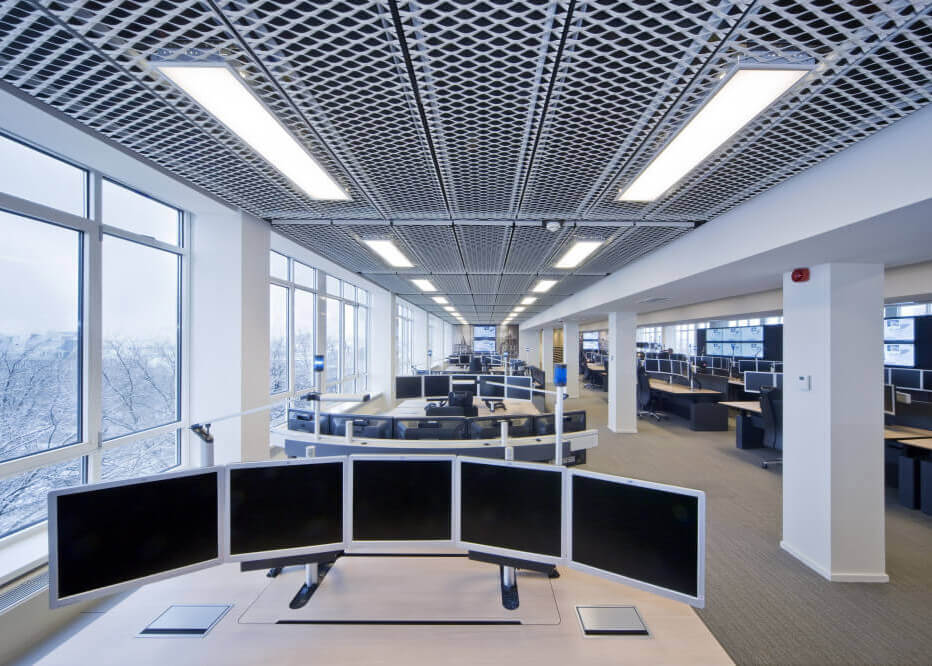 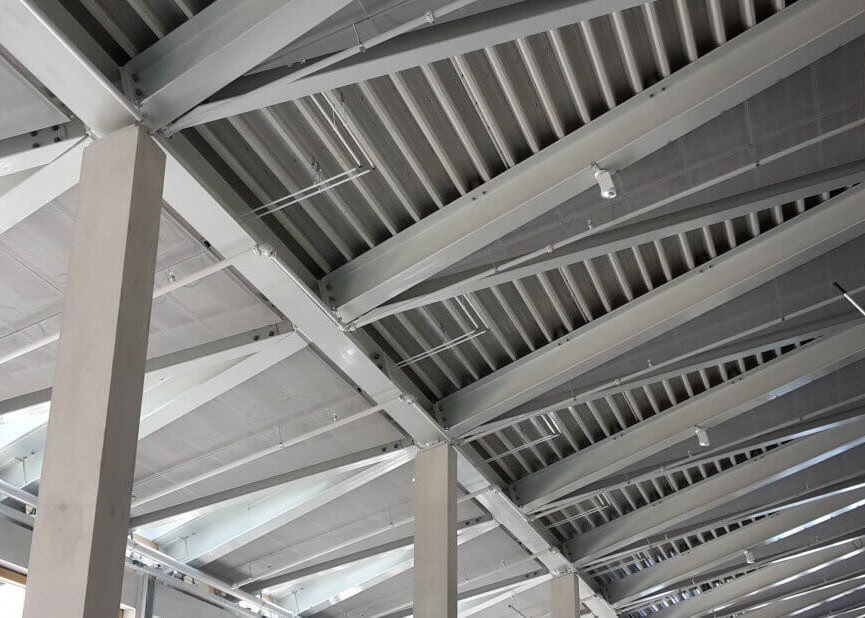 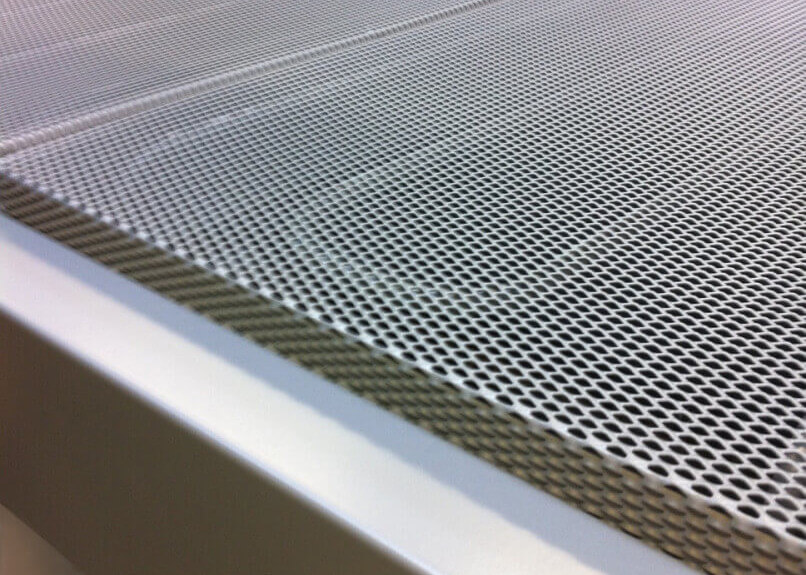 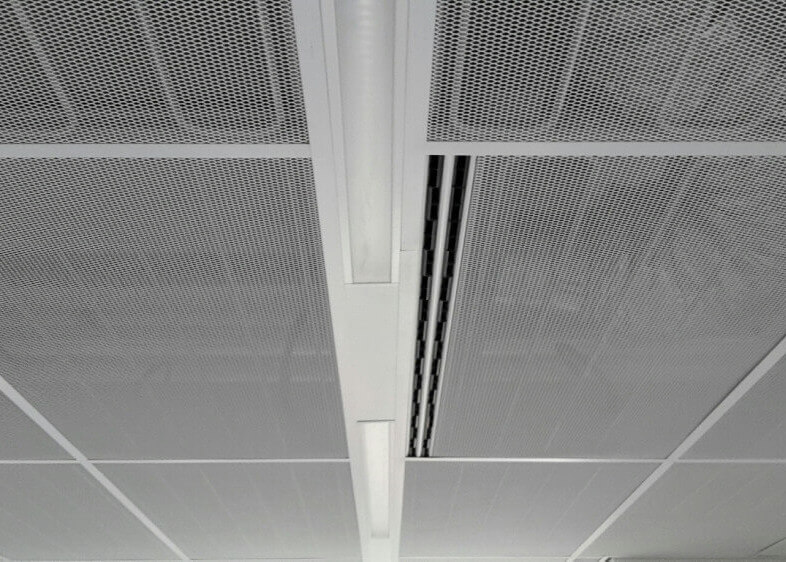 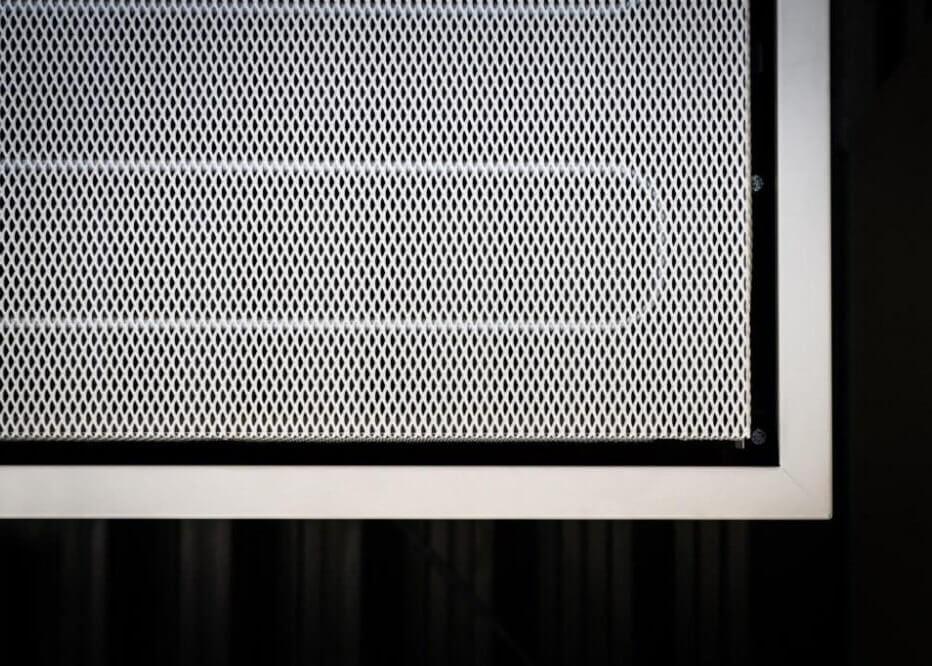 The system consists of ceiling panels made of fine-mesh expanded metal to which copper pipe meanders are soldered. Due to the open structure of the expanded metal, in addition to a radiation emission, a very high convective emission is also obtained. This allows the system to generate a doubling of cooling capacity compared to a traditional climate ceiling.

Since the expanded metal is used as a visible product, the architect's design is the starting point. For example, the expanded metal system is available in various mesh sizes and the color can also be adjusted to the wishes of the client. In addition, the expanded metal has a so-called grain as a result of which the material has a different degree of transparency from different viewing directions. For instance, the material allows one to choose between a closed-view and an open-view. In short, numerous possibilities to apply this ceiling for specific wishes.

The expanded metal can be integrated in various ways, such as:

Would you like to compare the MeandRo-V system with our other climate systems?

In principle, the MeandRo-V climate ceiling can also be heated. Even when cooling, the increase in convective transfer improves the capacity realised via water. Because hot air rises, ceiling height and the injected ventilation air will determine what contribution the convective part of the heating capacity makes to thermal comfort in the relevant living area.

The MeandRo-V climate ceiling can be fitted with noise-absorbing material. Depending on the structure, noise-absorbing material could hinder the connective effect and hinder the generated cooling capacity. Maximum cooling capacity is realised by creating the largest possible air shaft above MeandRo-V climate elements and by placing acoustic material directly against the under-side of the structural ceiling.

The MeandRo element is incorporated into the ceiling panel in Inteco's own production facility. This element consists of a copper pipe for water supply, measuring 8 x 0.5 mm and running back and forth, the full length of which is soldered on to aluminium expanded metal with an open structure. The expanded metal helps to laterally transport heat. And effectiveness is increased significantly because the pipes run in a perpendicular direction. The large surface and the open structure ensure effective and uniform heat transfer between the MeandRo-V element and the relevant area (air). During the heating process, the MeandRo-V element serves as a radiant panel and convector, and heat is released into the relevant area The opposite is true when it comes to cooling. This means heat is extracted from the area in question via the MeandRo-V element.

The use of copper pipe and flexible connection hoses means the system results in almost no oxygen diffusion. Because water is low in oxygen, almost no corrosion is encountered and trouble-free operation can be safeguarded. The permissible operating pressure amounts to approximately 8 bar, which means several storeys can simply be included in a single circuit.

Capacity
External factors like sunlight, transmission data for windows, walls and roofs, and internal factors like heat development via e.g. other people, electrical equipment and lighting, are used to define cooling and heating capacity per area when designing the climate system. This also involves taking into account variable effects like fluctuating solar load, heat accumulation due to e.g. concrete constructions, extraction via light fixtures, etc. The designer also determines the benchmarks implemented for comfort. Inteco then uses the design benchmarks to determine the layout of the MeandRo-V ceiling. Even high cooling capacities can generally be realised with the MeandRo-V ceiling.

Pressure loss
During the execution phase of each project, pressure loss is calculated for each connection point in the climate ceiling.
The following details are important when doing so:

Inteco aims to realise pressure loss of between 5 and 40 kPa, which can be realised by creating appropriate connections (series / parallel) between the MeandRo-V elements.

Climate system controls
Configuring capacity
The cooling and heating capacities of the ceiling can be set per configuration zone. The configuration zone is that part of the ceiling which has connected controls for realising the required capacity. Configuration can involve a whole building, part of the building (e.g. north/south side), a room or even a fixed pattern, and therefore offers great flexibility. The controls can be arranged centrally via the building management system or via a regulator in the relevant space.
Control based on variable volume flow
This control method assumes a constant temperature in the water supply. Room temperature is regulated by reducing or closing water supply via a two-way, three-way or six-way valve.
Control based on variable temperature
This control method assumes constant water volume. Room temperature is regulated by centrally varying the water supply temperature via the building management system.

Structure climate system
Cooling and heating can be realised as follows:
Using a completely separate system for cooling water and central heating water

Via a change-over system

Ventilation
Inteco has compiled a ventilation protocol for ventilating climate ceilings. This is discussed with construction partners during execution of the project so the climate ceiling can be ventilated in an appropriate manner. After all the preparation activities (filling, etc.), the prescribed flow must be conventionally ventilated per section. Because the internal diameters of climate elements and flexible hoses are relatively small, there is no chance of air being left behind in upright elements or hoses if there is sufficient water flow. Air bubbles are easily propelled and eliminated by the water flow. However, each section must be ventilated separately in order to ensure sufficient flow in each series connection. This is possible, for example, by implementing central ventilation whereby only one section is opened at any given moment. Followed by the next section, etc..

Production and environment
All ceiling products are produced in accordance wit the TAIM norm (Technischer Arbeitskreis Industrieller Metalldeckenhersteller). Only a small amount of production waste is produced during the production process for climate elements, while 100% of the basic material is utilised. During soldering activities for the MeandRo element, released gases are carefully extracted and filtered in accordance with the strictest norms. All parts of the ceiling and climate element can be easily sorted by material type, and can be recycled into high quality raw materials. Inteco's climate ceilings are ideal for projects where certification in accordance with BREEAM, for example, is required.

Fire safety
A feeling of safety. Inteco advisors are familiar with international requirements implemented for fire resistance, flammability and fire stability. They are perfectly placed to know which provisions are needed in order to comply with these requirements. Inteco's products and systems have been tested for their fire behaviour in accordance with the EN standard 3694.

Certification
Inteco is synonymous with quality and reliability. That is why we think it is important for our products and processes to comply with the strictest norms and certifications.