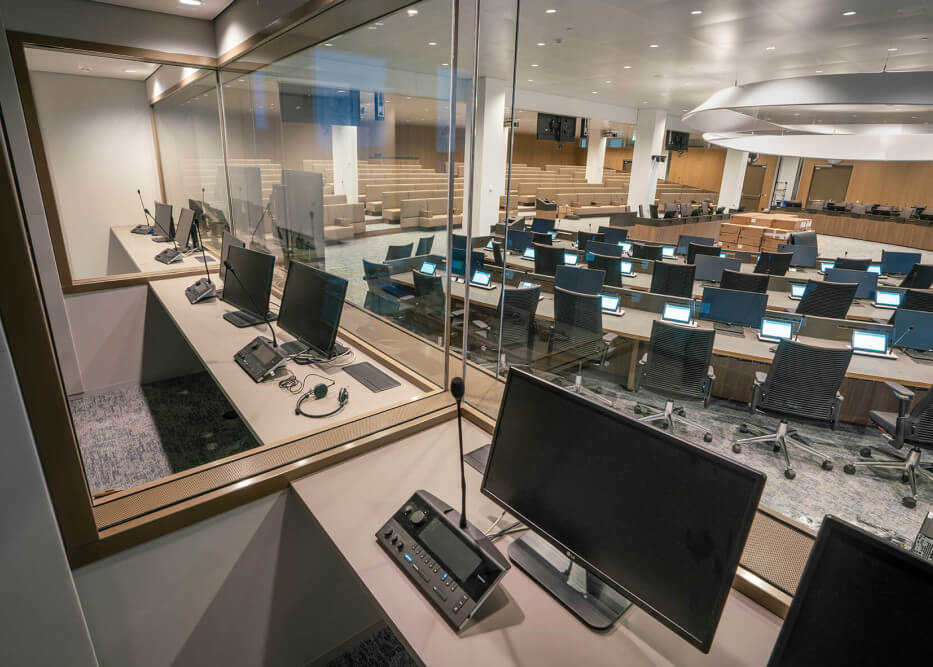 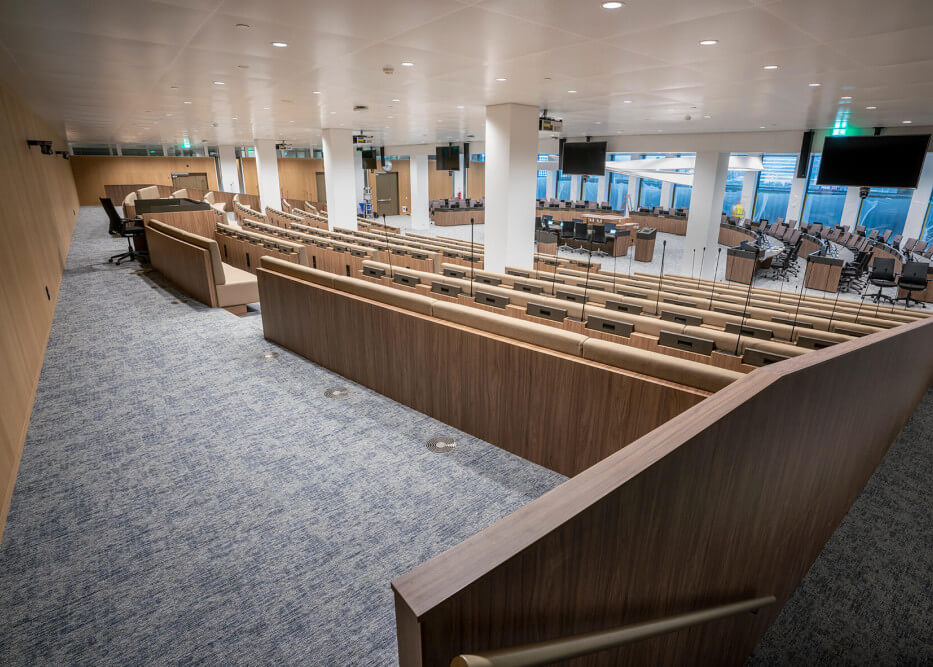 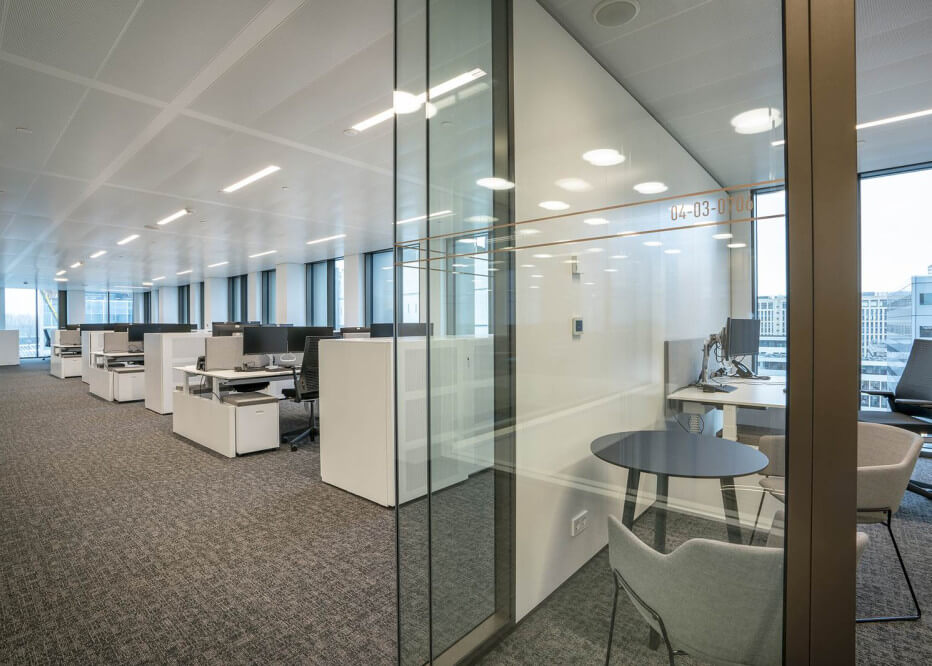 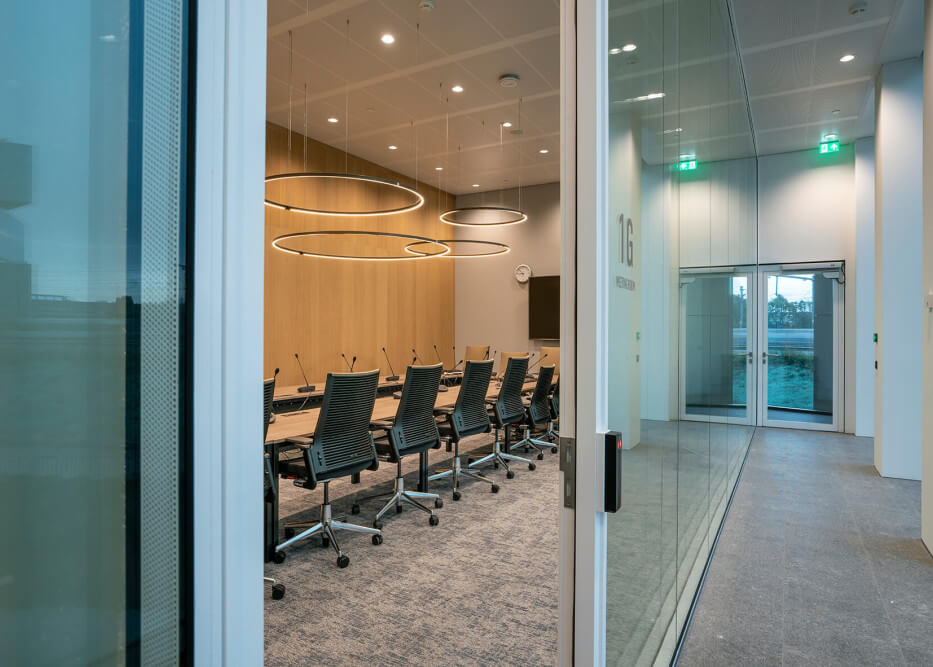 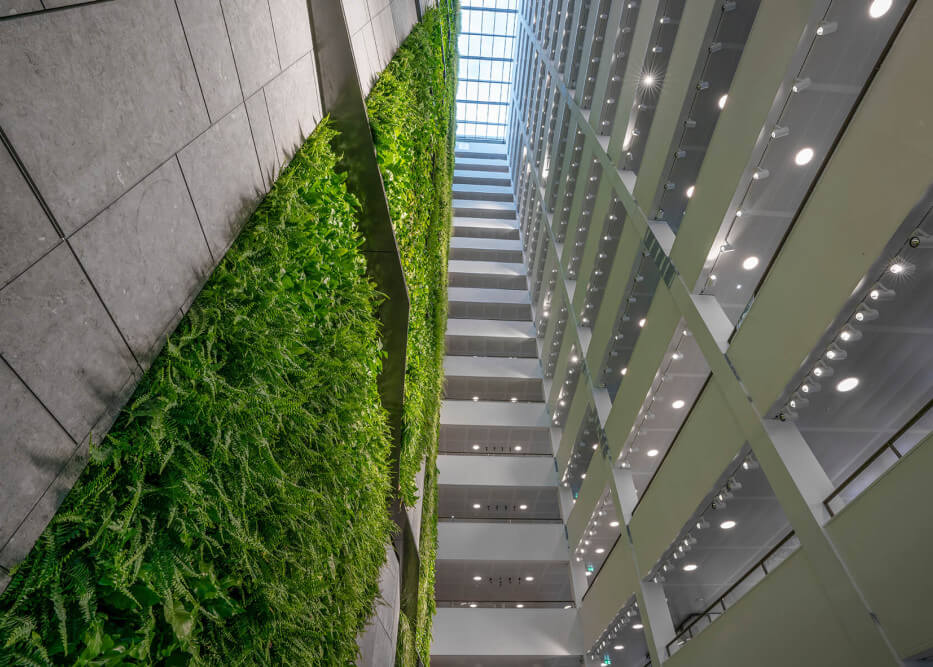 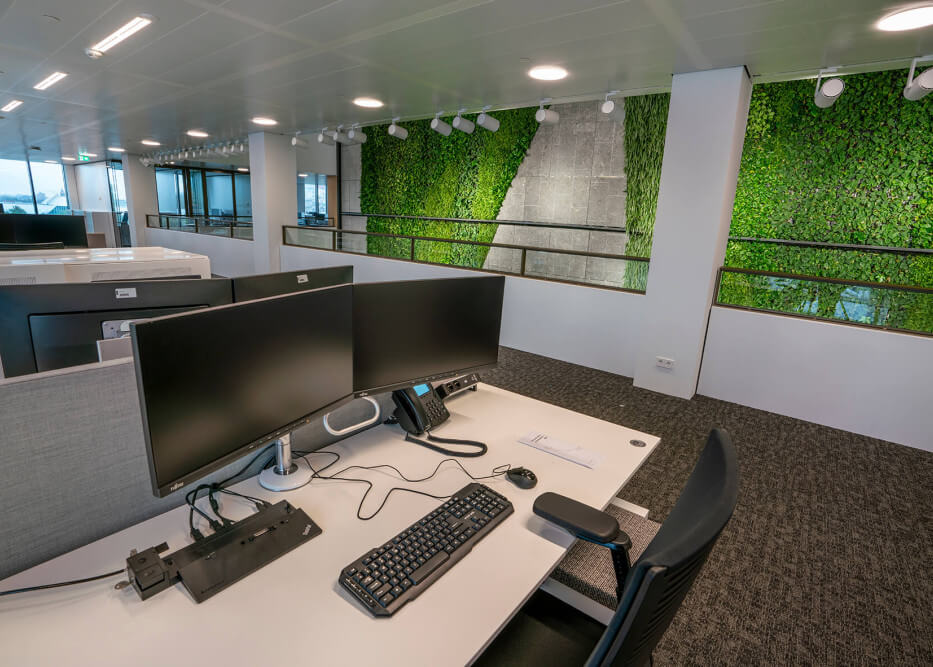 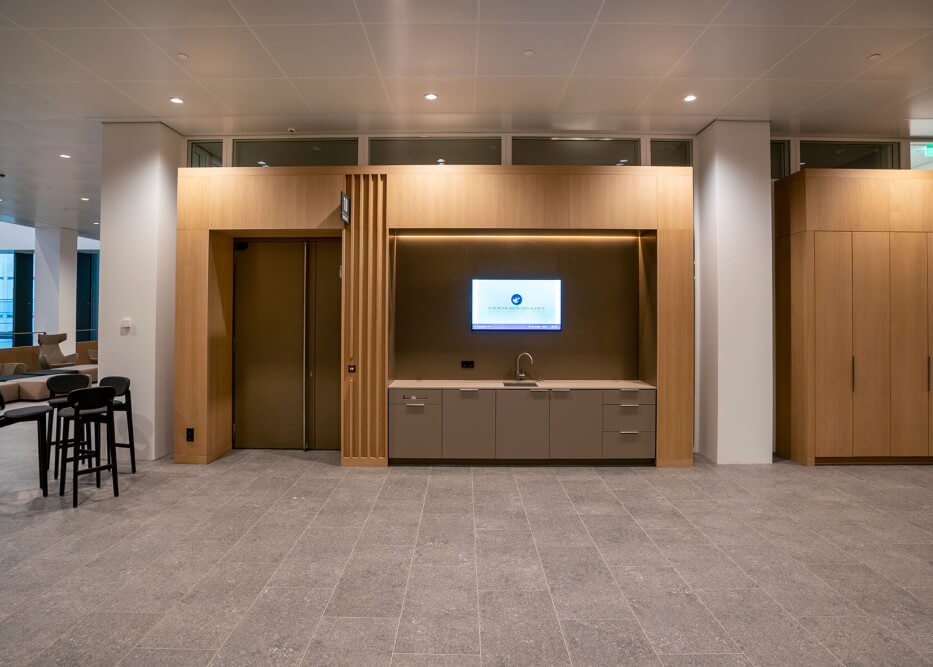 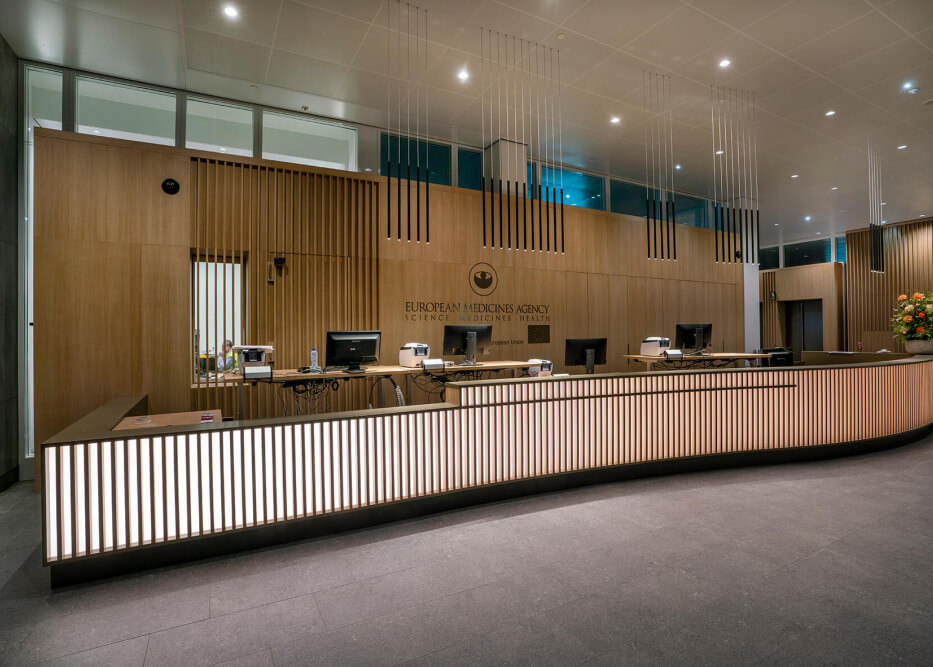 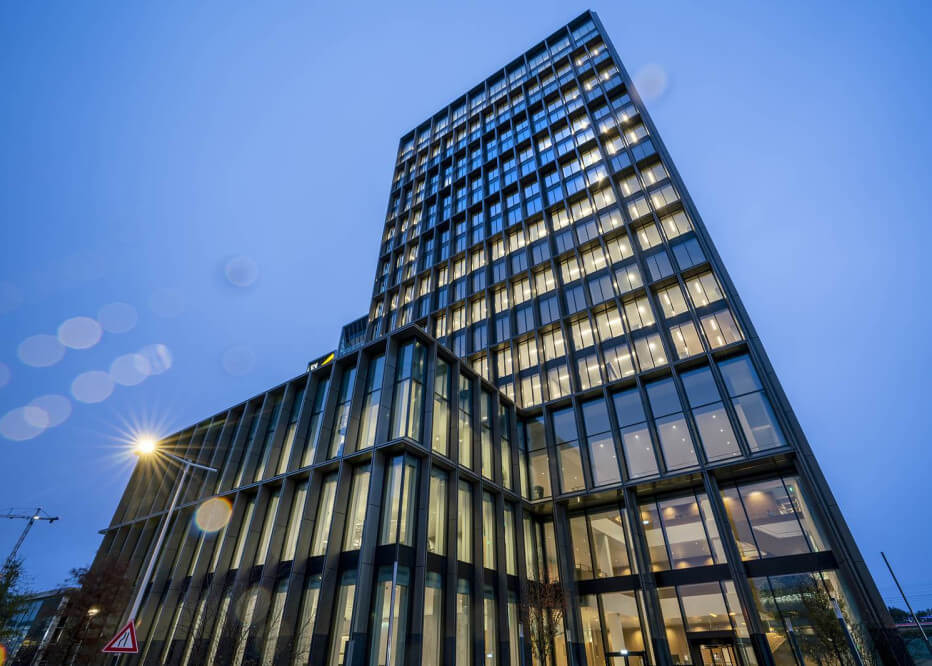 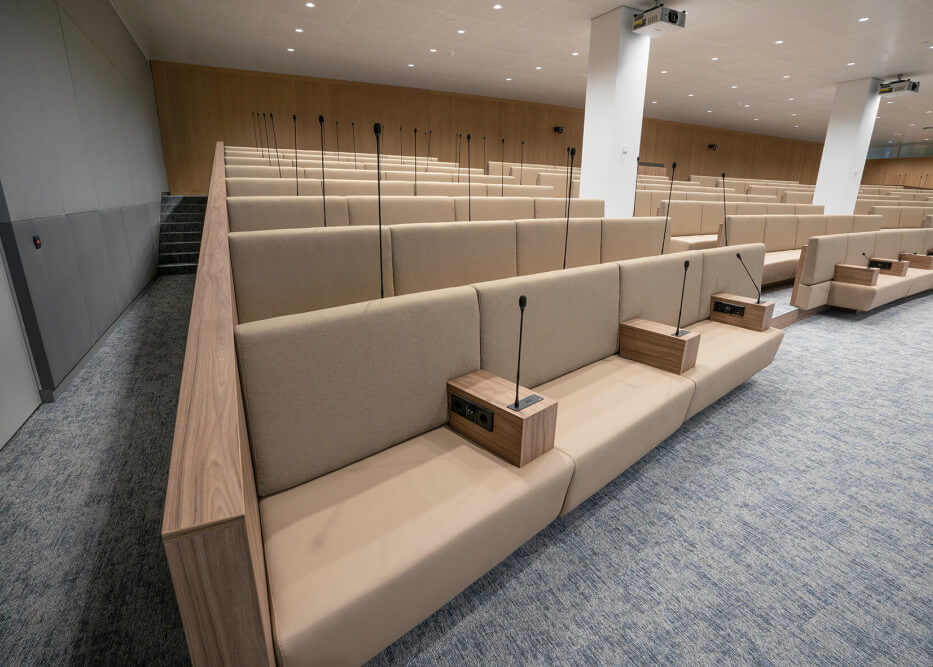 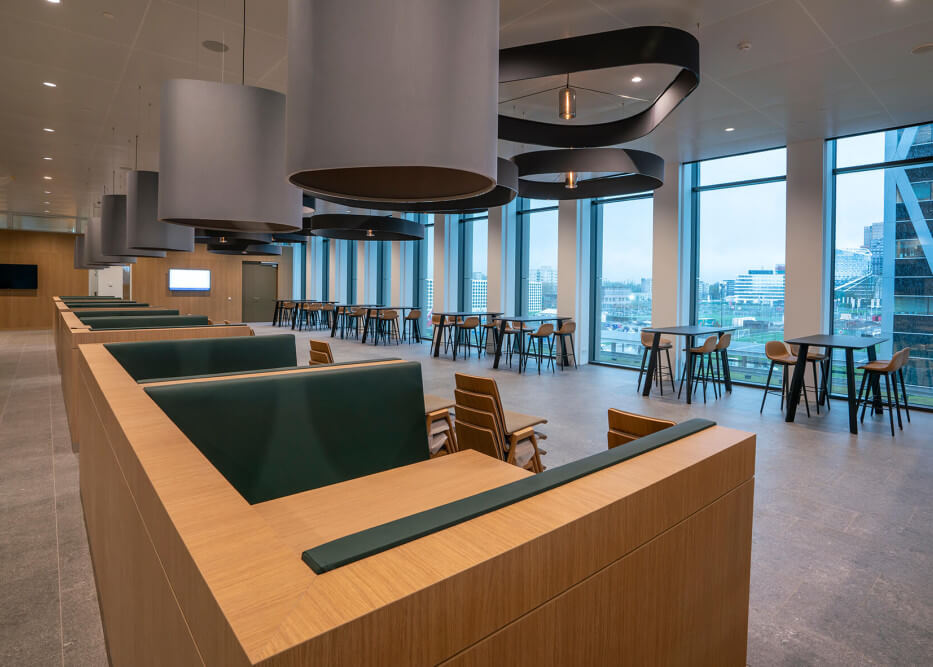 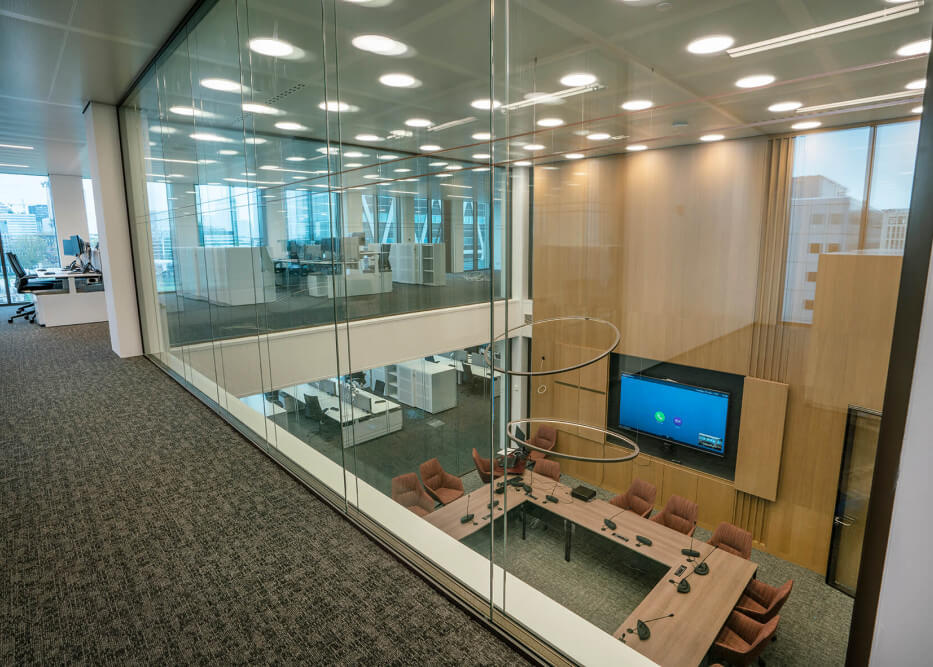 AMSTERDAM - Bouwcombinatie EMA, a collaboration between Dura Vermeer and Heijmans, has realized and delivered the new building of the European Medicines Agency (EMA) in Amsterdam in accordance with the hard delivery date. Today, Friday the 15th of November, the Central Government Real Estate Agency has officially accepted the new office from Bouwcombinatie EMA, which is responsible for the design, construction and maintenance (Design, Build, Maintain) of the new EMA accommodation.

Dura Vermeer, Heijmans and involved partners such as MVSA Architects, OKRA Landscape Architects, Fokkema & Partners Architects, DGMR, DWA, SDR Electrical Engineering, Van Dorp, Van Rossum Consulting Engineers are proud of this 'mega performance' that has never been achieved in the Netherlands in this way has been shown.

Inteco General Director Paul Ruijgrok is proud of the team performance that has been achieved. “Delivering 28,000 m² of climate ceiling with a leadtime that is 30% shorter than normal is a strong example of ' Comfort without Compromise '. This exceptional performance was possible because we formed an organization-wide projectteam in the preliminary phase. With this knowledge and experience of specialists, we were able to adequately anticipate construction situations before and during construction and ensure that everything went smoothly from a planning point of view. In addition, our production location in Boxtel has been designed in a Lean manner, which enabled us to supply flexibly despite the diversity of ceiling panels in this project; 2 color types, 500 different design types, numerous built-in components. ”

'Mega performance' which has never been shown in the Netherlands in this way.

The arrival of EMA from London to Amsterdam is a result of the imminent Brexit of Great Britain. EMA is responsible for the quality and safety of new medicines for humans and animals that are admitted to the European market. When bringing EMA to Amsterdam, the national government made an important promise to Europe: on November 15, 2019 there will be a new office with 1300 workplaces. This commitment was an important part of the deal, which Bouwcombinatie EMA has now fulfilled.

In May 2018, two months after the official contract signature (March 2018), the first pile was driven for the approximately 39,000 m2 building, of which 7 are large meeting rooms. In an eighteen-month construction period that normally represents double the number, Bouwcombinatie EMA realized an 81-meter high building with 19 floors.

Building combination EMA has done everything to ensure a fast construction time. For example, in order to start with the realization of the new building earlier, the provisional design has been divided into logical building parts (core, facade and finish / layout). By cutting into building parts, design phases of different parts were mixed up. This allowed the piles to go into the ground, while the final design was still being worked out on other parts. A number of time-saving choices have also been made, based on proven construction techniques. For example, a sliding formwork has been used to realize the concrete core. For the finishing, installation and architectural, it was decided to prefabricate as much as possible. Think of piping, raised floors and wall panels.

Especially the use of sliding formwork for the construction of the concrete core was an ideal solution to build with a lot of speed and was one of the highlights in construction. With the help of this sliding formwork, the concrete core of the office was built in more than five weeks - from mid-August to mid-September 2018, and the highest point of 81 meters was reached. Immediately after that, the steel construction started, after which the façade panels could be installed in the spring of 2019. Where technically necessary, Bouwcombinatie EMA had an exemption to continue working outside regular working hours. As soon as a floor was closed, the construction started.

Another important success factor for the fast construction time was creating the team feeling and the sharp focus of those involved (from Bouwcombinatie EMA and partners to suppliers and subcontractors) on that one goal: meeting the 15 November deadline. The good cooperation with the Central Government Real Estate Agency also contributed to the smooth construction, such as the direct processing of feedback from the client in construction instead of in the design. Consultation sessions between client and Bouwcombinatie EMA were held continuously in order to coordinate the wishes of the client and to minimize the chance of changes in the construction. Both parties have worked closely together from day one. The mutual openness and the agreement that the parties would not surprise each other has given a lot of confidence in the cooperation.

The new EMA building, designed by architect Fokke van Dijk of the Central Government Real Estate Agency in collaboration with MVSA Architects, has a relatively sleek and professional design. As a counterpart, OKRA Landscape Architects designed a sumptuous landscape ribbon with organic shapes from street level to the top of the building. This ribbon is a wavy shape that starts at the entrance square, continues through the roof garden, the coffee lounge and continues through a 60-meter high green wall in the atrium to the top of the building. More than 52,000 plants are placed in the indoor green wall, which are placed in a hundred steel frames. The EMA office receives a BREEAM Excellent Certificate. For the further implementation of the high sustainability ambitions of the Central Government Real Estate Agency, EMA and the municipality of Amsterdam, use is made of sustainable materials, district heating, light sensors that switch on and off during movement, individual heat and cold control for optimal energy consumption, a rain barrel of 200 cubic meters and nest and bat boxes.

“Delivering 28,000m2 of climate ceiling with a leadtime that is 30% shorter than normal is a strong example of 'Comfort without Compromise'.

The MeandRo® climate system, which has been developed and patented by Inteco, is a copper diffusion-proof radiant panel that is uniqu...

When doing so, sustainability serves as a benchmark

Inteco's ceiling solutions go hand-in-hand with the life cycle of the building. This is not only environment-friendly, but also offers the most financial benefits to clients. We also take into account what will happen to ceilings after their life span.

Inteco is a front-runner in market developments

Inteco has various patented products in the climate ceiling and induction unit sector. These innovations comply with all current norms and guidelines in the market, because Inteco is synonymous with quality and reliability.